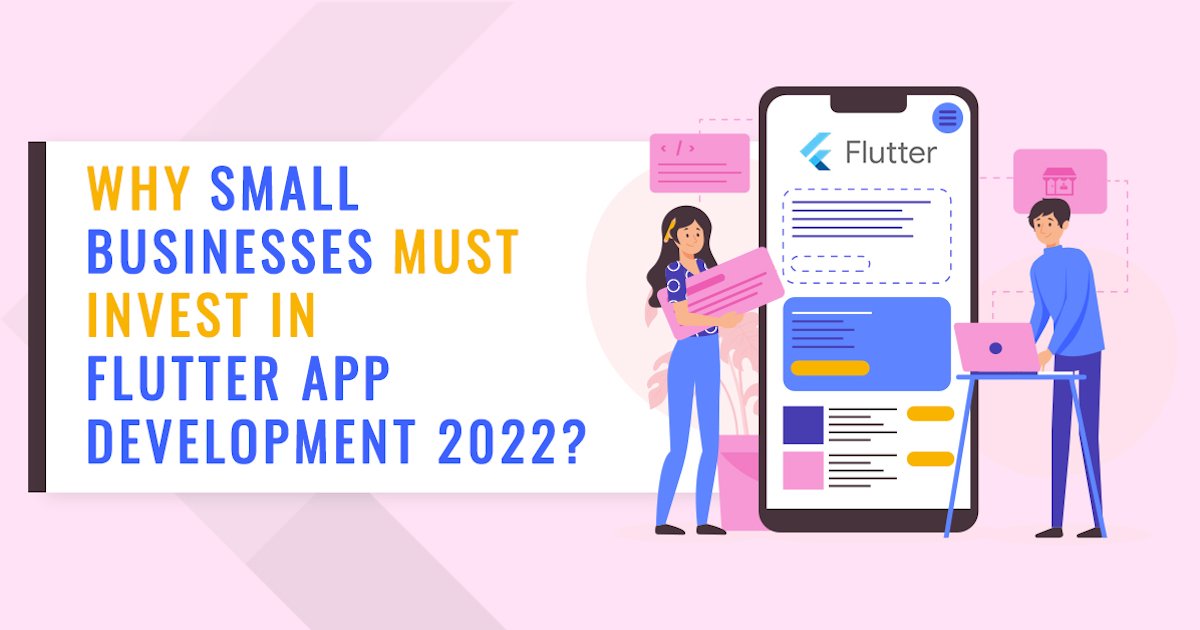 Flutter happens to be one of the fast-growing cross-platform app development technologies that is making all the right noises. So, as a small business owner, the question to ask is whether developing a flutter app is a good idea or not?

In this blog, we have detailed a few reasons that make a strong case for you to go with flutter application development as a small business.

Strong support by Google, the hot reloading feature, and a growing community. These are just a few reasons you should opt for flutter app development.

Flutter proves to be a highly cost-effective option compared to building a native app. This is because flutter SDK supports a wide range of requirements irrespective of the size and type of the business. In addition, Flutter has a single code base; thus, instead of building two separate native apps, you can build a single cross-platform app using Flutter. This way, you can save the cost of building two separate apps.

The code reusability feature proves to be a boon for small businesses as it allows them to significantly reduce the costs associated with app development. The cost of development is also reduced with flutter apps as they take less time to develop than native apps.

Time is of essence, especially for small businesses and startups. As a small business, your profitability depends on how fast you can complete your tasks, for instance, building flutter apps. However, when you wish to build a comprehensive app with all the bells and whistles, it can be a complicated and time-consuming process.

Flutter allows businesses to gain the advantage of a reduced time to market as it helps developers build applications faster. This is because Flutter’s hot reloading feature enhances developers’ productivity, allowing them to build apps faster. Flutter also provides developers with an extensive range of customizable widgets, apart from hot reloading.

As a result, the developers can build apps faster using these widgets. In addition, Flutter allows the developers to build responsive UI elements that adapt easily to mobile, tablet, and desktop screens.

As a business, you will need to deliver an exquisite user experience to ensure the success of your mobile app. This is where the role of Flutter comes as apps built with Flutter have an excellent user experience.

This is primarily because of the extensive range of beautiful widgets flutter provides to its developers. Instead of using native components from other platforms, the flutter developers can use widgets. The rich set of reusable UI components serve as building blocks for flutter app development.

By providing platform-specific widgets, the team behind Flutter has ensured that the apps built using these widgets can imbibe the nuances of the specific platforms for which they are built. Many people think that the widgets of Flutter are not customizable. This is far from the truth. Flutter allows the developers to easily customize the widgets and even build their own widgets.

One of the significant benefits of Flutter is that it has its own rendering engine. The rendering engine ensures a high level of consistency when a flutter app switches platforms. This allows Flutter to provide an excellent user experience across various platforms.

Another benefit of hot reloading is that the designers and the developers can simultaneously see the effect of the changes and take necessary action immediately. This saves a lot of time and effort on the part of developers as well as designers.

A major advantage of flutter apps is that they can run effortlessly on various platforms. As it runs on many platforms, a flutter app saves the development time spent on building apps for different operating systems, boosting productivity in the process. In addition, flutter allows developers to build highly responsive apps that can run smoothly on any device.

Flutter is the right choice for small businesses

Flutter app development proves to be a great value proposition for a small business owner. The wide array of benefits that Flutter provides can boost the growth prospects of your app. Hire top flutter developers to leverage the power of Flutter for your business.

An enthusiastic Operations Manager at TopDevelopers.co, coordinating and managing the technical and functional areas. She is an adventure lover, passionate traveler, an admirer of nature, who believes that a cup of coffee is the prime source to feel rejuvenated. Researching and writing about technology keeps her boosted and enhances her professional journeying.

www.topdevelopers.co/
Your comments are welcome!
Powered by Ultimate Social Comments