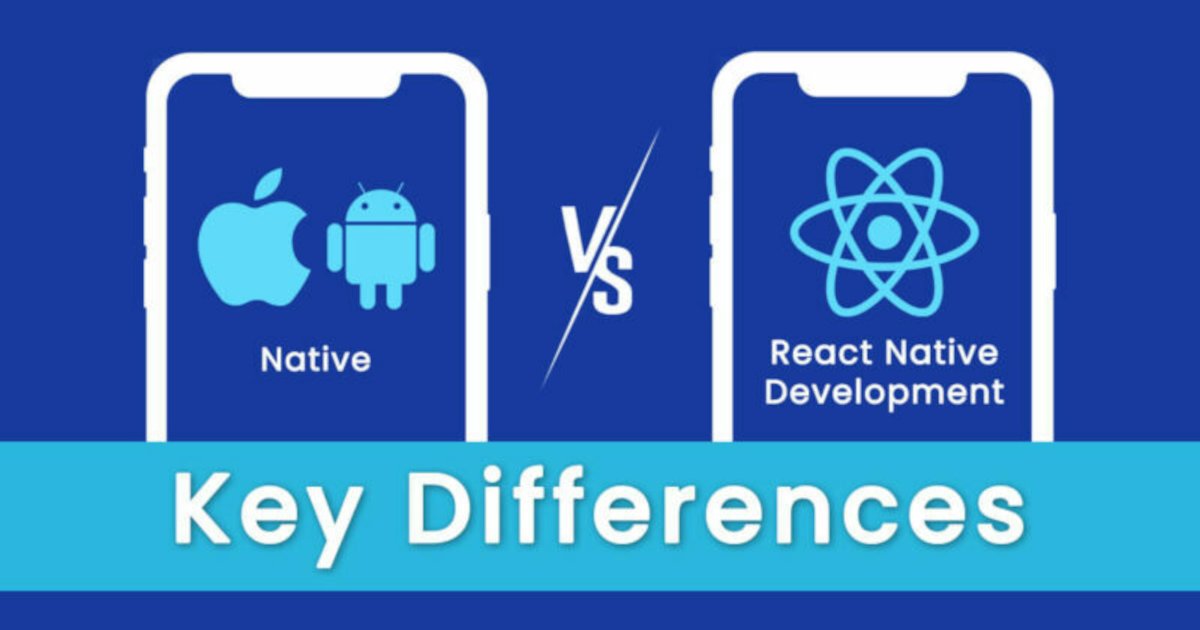 The mobile app development market is poised to grow at a CAGR of 20%. Experts predict that the market’s size will be $725 billion by 2030. Primarily there are two types of mobile apps. Native and Cross-platform.

Native apps are those apps that are native to a particular platform. For instance, if you build an app for Android, then it will run only on Android devices. It won’t run on iOS devices or, for that matter, devices running on other operating systems. The same holds true for native iOS apps.

What Is a Native Application?

Native applications are created for a specific platform and come with many performance enhancements. These apps natively include the hardware and software that are required by specific platforms, making them more efficient. Mobile apps constructed natively are going to work on the operational structures they have been adapted for, and because of this, when you need to target customers on iOS and Android, you’ll have to update the mobile app twice if you have two separate native apps for iOS and Android.

What Is React Native Application?

The popularity of mobile app development evolved much more when React Native was launched. This is a JavaScript-based technology that builds cross-platform apps and allows you to develop mobile apps using the same data codebase for both platforms – iOS and Android.

One of the best benefits of React Native is that it helps you develop your mobile app fast. Companies like Skype, Facebook, and Instagram use React Native to build their apps.

The top factors to consider in Native vs React native development

Let’s have a look at the top factors you need to look at while choosing between React Native and Native development.

One of the most important differences between Native and React Native is that you need to write the code separately for each platform in the former, while you only need to do this once in the latter case. You need to give two different teams the job of developing an app, one for Android and one for iOS in case of a native app. Besides, the app needs to be run and tested every time a change is made in the code. Thus extra time is required to build a native app.

Whereas in the case of React Native, a single code is written for both platforms by the same developers, which means you can build a single React Native app for both Android and iOS. This saves you time and resources. Plus, React Native offers hot reloading, so you can make changes to your app without needing to rebuild the entire project. This saves a lot of time and effort!

Suppose you are looking forward to an earlier and cheaper start to the mobile market while targeting both platforms. In that case, go with React Native.

Developing an app with React Native would cost less than developing a native app since the costs of React Native apps are generally 30%-35% lower than that of a native app. This is due to the fact that you do not have to deploy separate teams to build apps for multiple platforms like iOS and Android. Also, with features like hot reloading, the development time is reduced. This reduces the costs as fewer developer hours are invested in building a react native app. So if cost is your main factor in distinguishing between Native and react native, then react native will be the best choice.

One of the main factors to consider when deciding which is better for you is UI/UX experience.

By using React Native framework, the developers can save time, as they can reuse existing code, and it also allows them to create separate pieces of platform-specific code. This leads to much smoother transitions and animations.

However, one downside of a multiplatform app is that it is difficult to match design/performance standards for both Android and iOS. A native app solves this problem by providing the same UI/UX standards on both platforms.

Native mobile app development is great for UI/UX experience because it allows you to design your screens individually for both Android and iOS devices. This makes for a better mobile app UI and UX.

So, when comparing React Native and Native mobile app development in terms of UI/UX experience, Native is the clear winner.

When compared to Native, React Native comes with more opportunities for scaling. The scalability of React native is due to the vast range of libraries and third-party integrations available. With the help of React, you can fully understand project maintainability and scalability. It’s all thanks to a powerful API that is capable of organizing applications in a proper manner. There are also many community projects which provide an easy way to start small and add new features as you scale up.

Thus the app you build with React Native can scale better than the one you built with a native kit. This is why React Native happens to be perfect for developing scalable apps.

Another thing to think about when you’re comparing Native vs react-native development is the app’s performance.

React Native is only able to handle a single device thread, which limits its usefulness when you need to run multiple asynchronous tasks. There are also many features incompatible with React Native, which make it less efficient and don’t work. The limitations of react native can make it incompatible with features found on modern devices or technologies which aren’t fully supported. In complex cases, it has fewer capabilities than a native application and may result in errors.

Native apps are made using languages like Swift, Java, or Kotlin, which allow for better performance, heavy calculations, and support for advanced hardware. Native app developers can find it a lot easier to create any kind of mobile app, given Native technologies.

Native is the clear winner in terms of app performance. However, react native is making fast strides in this area and is closing the performance gap with subsequent updates.

Ease and robustness of coding

The two native languages of Android and iOS, Kotlin and Swift, are both considered to be strict-typed and object-oriented. They’re easy to learn with documentation and have a fixed set of rules.

On the other hand, JS will seem easier to learn but has various flaws and loopholes. As a result, it can pose a problem for React Native developers to learn well.

So while JavaScript is easier to learn, it is not as robust as native programming languages. It is your choice whether you want to go with the ease of JavaScript or choose more robust coding languages.

One other factor to consider when deciding what kind of app to build – native vs React Native is the long-term support.

Native platforms are supported by Google and Apple and can fetch tools for any feature implementation, fix errors and launch updates without affecting usability.

There are currently no updates for React Native that are as rapid and consistent as the tweaks on Apple and Google. If you want your app to remain relevant, it is crucial to stay updated with those updates and tweak them accordingly. Besides, React Native doesn’t provide long-term support – which makes you question whether it’s a good choice for long-term mobile app development.

Interaction with other native apps

The interactivity with native apps is another factor that you need to consider when you select react native and native app development approaches.

So a native mobile app can interact easily with other native apps, but that isn’t the case with React Native. When building a React Native app, you’ll have to build an access point for it which will work separately as well.

One of the reasons why React Native isn’t as popular as other libraries is because of the limited access to data. That being said, it’s best suited for applications that don’t need continuous interaction with other apps.

When it comes to API accessibility, Native app framework developers can have access to all APIs without restrictions. This is not so easy in React Native technology.

Because React Native apps can only use a few APIs, you may need to create an API layer with native programming. However, this additional development costs time and increases the final price tag of your app.

Native is superior to React Native when adding APIs.

React Native is the perfect choice for cross-platform use cases, but it lacks certain APIs that a pure native app might have. To use these APIs, your react native app development company should have coding knowledge in native languages.

It’s different in the case of developing a Native mobile app for Android or iOS devices, as there is no such restraint for such apps. Hence here, Native app development is again a better choice in the native apps vs react native battle.

React Native framework is based on JavaScript, which is a loosely typed language.

Besides, several third-party libraries and APIs are used in React Native development, which can make it difficult to identify errors and lapses. As such, React Native is less secure compared to Native app development technology.

Native app development is tedious, time-consuming, and costly. A lot of time goes into resolving bugs, and this can cause the bug to re-appear in a different platform. But when it comes to React Native mobile app development, resolving bugs for one platform is okay as the app is a cross-platform one.

When to Go With Native Mobile App Development

Native app development is good in the below-mentioned cases

When to Choose React Native for Mobile App Development

React Native proves to be the right choice when

Native iOS and Android are here to stay and will be for the foreseeable future. However, React Native’s future is somewhat uncertain. True, the React Native community is rapidly growing, but with the current React Native version still not being 1.0 (the most recent version at the time of writing this article is 0.70), we have yet to see React Native at its best.

Another thing to note is that Facebook updates React Native on a regular basis, but they are not interested in fixing bugs that do not directly involve the Facebook app. The process by which react-native compiles XML to native code is a mystery. If there is an error in a React Native component, you will have to either wait for Facebook to fix it or fix it yourself, which will require going into native code.

On the other hand, React Native is an excellent choice for many types of applications, like B2B services. For example, it has a low adoption price and a short development time.

React Native is a very useful tool that can let us create mobile apps more quickly and with less effort and complexity. The beauty of React Native is that it allows you to build for different platforms with the shared codebase and experience.

More teams are starting to use React Native for their mobile app development, and the features that it has will be catching up with Android and iOS sooner rather than later.

An enthusiastic Operations Manager at TopDevelopers.co, coordinating and managing the technical and functional areas. She is an adventure lover, passionate traveler, an admirer of nature, who believes that a cup of coffee is the prime source to feel rejuvenated. Researching and writing about technology keeps her boosted and enhances her professional journeying.

www.topdevelopers.co/
Your comments are welcome!
Powered by Ultimate Social Comments